Castec-Southfield season opener canceled after big fight in the stands

On Thursday, Cass Tech and Southfield kicked off their football season. The season lasted just over a quarter of his time after the game was called off due to unruly behavior by a fan.

Southfield, Michigan (FOX 2) – High school football season is back. Line-to-line battles are expected, but those in the stands are expected to stay away from the action. However, one of his first football games of the year was abruptly canceled due to bad attitudes from the fans.

One of the first high school football games of the season has a strange ending. It happened here at Blue Devil Stadium, but had nothing to do with the players.

Detroit’s Cass Tech and Southfield A&T were playing in one of the first high school games of the season at Lawrence Tech’s Blue Devils Stadium on Thursday. The game lasted him one and a half of about four minutes until it had to be stopped.

The referee called the game into the second quarter after several dangerous incidents involving stadium fans.

Sam “Stick” Day attended the Woodward Sports game and worked with Prep Gameday to live stream the action and said that this would never happen at a high school game.

“That’s one of the things we discussed last night. You’re not only depriving parents of seeing their kids, you’re depriving these kids of playing games. There’s a scout in the stands.” Chances are, you’re depriving these kids of scholarships,” he said. “Then I got some feedback from Lexi, her field reporter and sideline reporter. She said there were too many people there. People were jumping over the fence.” There was also a brawl outside.” 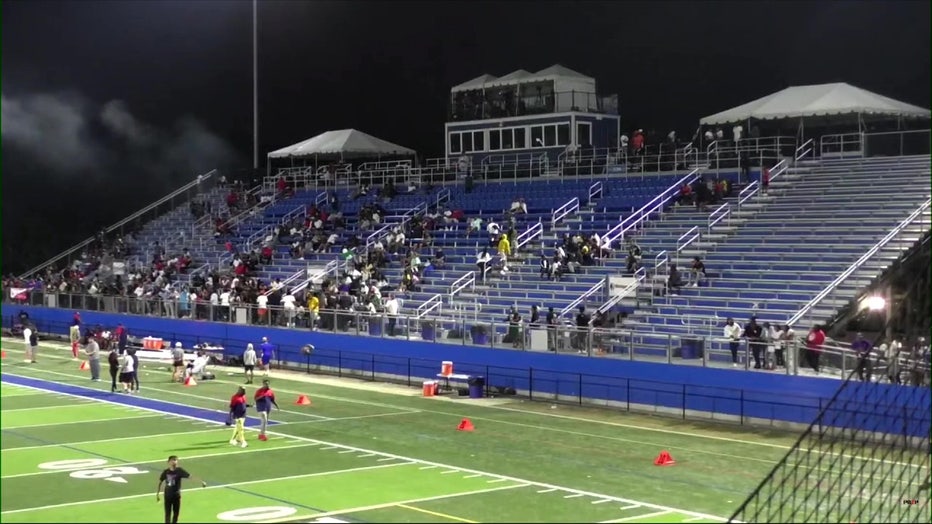 A football game between Castell and Southfield was called off on Thursday due to poor fan behavior in the stands.

Authorities and police soon arrived and ordered everyone to leave.

The Southfield police chief told FOX 2 that there had been several fights and officers had detained the two children and later released them to their parents. Police did not report seeing weapons.

After the game, former Michigan defensive back and Cass Tech standout Terry Richardson II saw his parents antagonizing opposing players and fans blowing marijuana smoke in the faces of children and adults. I tweeted that I saw it. Richardson said the Detroit community should do better.

Confusion began to unfold with less than six minutes remaining in the second quarter. Action stopped after Southfield A&T scored a touchdown and had a chance to tie on a two-point conversion attempt.

Sometime later, the coaches of both teams met with the referee and another official on the phone. Body language from the coach indicated some disappointment when the game was interrupted.

Day says there was a glimmer of hope that the game would only continue if the fans left.

“What was really crazy was what the stands were telling everyone. You can go on and the game goes on, but half the crowd didn’t want to leave, so we had to stop the game.” he said.

Both teams will play the remainder of their games at different stadiums on Friday night, and fans won’t be able to see them in person.